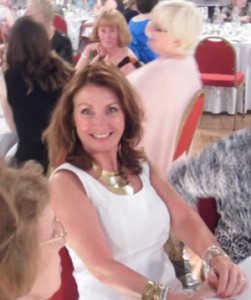 Adrienne’s first historical novel, A Most Deadly Affair, set in the 1950’s, was longlisted for the coveted Elizabeth Goudge Trophy at the Romantic Novelists’ Association (RNA) conference held at the Queen Mary University in London, recently.

The annual competition, which is judged on the first chapter of a so far unpublished novel, received a record number of entries this year and Adrienne was bowled over when it was announced A Most Deadly Affair had made it into the top six.

Award-winning author and current RNA Chairman, Eileen Ramsay, commented that the standard this year was extremely high, and A Most Deadly Affair’s premise of a heroine with exactly the same birthday as the Queen was fascinating; especially as she inherits the family business – a funeral parlour – at the same time as the Queen ascends the throne.

Adrienne is adding this achievement to a growing list of accolades. Debut novel, The Hollow Heart and follow-up, A Change of Heart were both shortlisted for awards at the Festival of Romantic Fiction 2013 and 2014 respectively whilst the conclusion of the trilogy, Secrets of the Heart will be submitted later this year.

Currently working on her new novel, Scandal of the Seahorse Hotel, Adrienne is taking a break to attend the Romance Writers of America’s (RWA) conference in New York next week.

“I am thrilled to have my work recognised, especially as many of the writers who entered are long-established, best sellers who I have always admired. It goes some way to demonstrate my writing career is moving in the right direction, keeping everything crossed – even my eyes – when I say that, of course.” She commented.

The Elizabeth Goudge trophy was donated by the English author and distinguished former Vice President of the Association, Elizabeth Goudge. Since 2000 it has been associated with—and presented at—the RNA‘s Annual Conference. The award is open to all RNA members attending the conference, published or unpublished. The theme of the competition is set by the chairman and varies from year to year; this year’s theme was Family Values.

Want to join the discussion?
Feel free to contribute!

Anyone watching me might say ‘hasn’t she the life staring out kitchen window for ages watching🐦 eating🍏!”Only a fellow ✍️will know that the I was working. New plot scenario drifted in. Divorce. Baby. New relationship. Devlin?Caroline? Maggie?🤔👏😀 #CityGirlsReunion #amwriting

📚A Music Themed #ContemporaryRomance. Rosie's #Bookreview of Only The Beginning By Laramie Briscoe #BookTwitter https://rosieamber.wordpress.com/2023/01/26/%f0%9f%93%9aa-music-themed-contemporaryromance-rosies-bookreview-of-only-the-beginning-by-laramie-briscoe/ via @rosieamber1